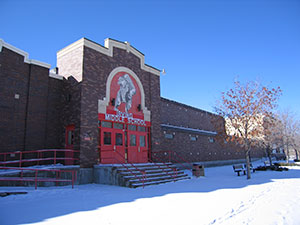 Irving Junior High opened in January 1925 as one of Pocatello's first junior high schools along with sister school Franklin Junior High. Irving was built west of the tracks while Franklin was built on the east side. The two schools followed the same one-story floor plan known at the time as "bungalow" schools.

On October 8, 1949, Irving was destroyed by fire, sharing the same fate as Pocatello High School, which burned down in 1914 not many blocks from Irving's location in West Pocatello. For the next three semesters, Irving's students were relocated to the basement of the high school until the new building was ready on January 22, 1951. After the completion of Century High School in 1999, 9th graders were moved from the junior highs to the high schools, and Irving was renamed Irving Middle School.