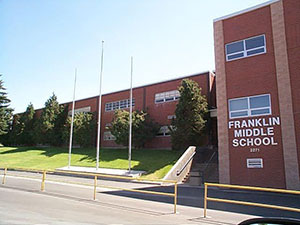 Franklin was Pocatello's first junior high school—completed in 1923 and opening in 1924. Located on North 8th Avenue, the orignal structure was built "bungalow" style (one-story), representing a departure from the traditional two-story schools that dominated school construction pre-1920s. A second junior high of the same floor plan was completed just one year later.

By the 1960s, the space and facilities of the 8th Avenue building were clearly insufficient for junior high instruction. It lacked physical education facilities, housed an inadequate library, and was generally too small. A bond was passed to build a new Franklin Junior High on East Terry and to convert the old building to an elementary school. The new building opened in 1965. In the early 1990s, a major expansion was added. With the completion of Century High School in 1999, there was enough space to bring 9th graders to the high schools and convert the junior highs to middle schools. Thus, Franklin is now known as Franklin Middle School.