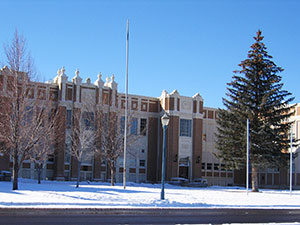 Pocatello High School (commonly known as "Poky"), is a school steeped in history. First established in 1892 as West Side School, it was touted as the handsomest school in Idaho. Indeed, the stately flag-topped belfry, arched windows, and beautiful gables were a sight to behold. Tragedy struck in December 1914, however, when students returned from lunch to find smoke pouring from the doors and windows. Firemen rushed to the scene on horse-drawn wagons while teachers and students saved what they could from the hungry flames. Onlookers were aghast and teary eyed when the great bell toppled. By nightfall, only the shell of the building remained.

Blame for the blaze was placed on a pile of scraps in the furnace room. For the next three years, students met in churches, laundry buildings, and on the school lawn while a new school was erected on site. Construction was completed in 1917. Though the school has undergone numerous additions and renovations since that time, the building remains a historic fixture of Old Town Poctello.