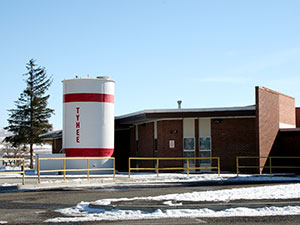 Serving students from northern Bannock County, Tyhee Elementary School was established in 1914 under Tyhee School District #63, created the year before. Entering the school that year were 49 boys and 42 girls. By 1934, enrollment had increased to 175 boys and 125 girls, and an election was held on February 9 to consider consolidation with the Pocatello schools. The election carried 136 to 26, and the Tyhee district united with the Pocatello district, known as Independent School District Class A No. 1, Bannock County, Idaho.

Tyhee Elementary School has grown over the years with various addition and renovation projects. As part of the bond issue of 1961 that funded construction of Highland High School, Tyhee received 8 new classrooms, a cafeteria, boys and girls restrooms, a boiler room, and a remodeling of the existing building. Tyhee enjoys a rich blend of ethnic backgrounds at its school, largely influenced by its proximity to the Fort Hall Indian Reservation.