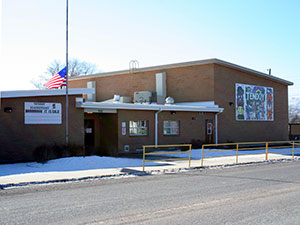 Tendoy opened in February 1957 after passage of a bond issue, put to vote two years earlier. The bond provided for construction of a neighborhood elementary school (Tendoy) and a combined junior high/elementary school, which was later named Hawthorne. Among the smaller elementary schools, Tendoy is nevertheless a first-rate institution with hard-working students who attain impressive standardized test scores.

Located near the busy intersection of Jefferson and Alameda, students are protected by a fenced playground and signs directing motorists to travel no more than 20 MPH. Tendoy students come from the North Pocatello area. The school is easy to identify by its colorful sign depicting a Tiger, Tendoy's mascot, and happy school children.