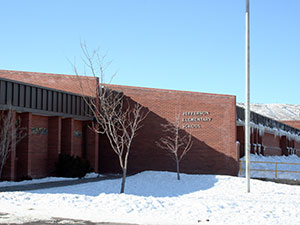 The original building that housed Jefferson Elementary School opened in 1919, the same year as Washington Elementary School. Both buildings followed traditional two-story construction, which fell out of popularity the next year. By December 1978, the ten oldest rooms of the aging building were condemned for safety reasons. The entire school closed during demolition, placing the burden on Wilcox, which held double sessions for the 1978–79 school year. For the 1979–80 school year, students were divided between St. Joseph School (rented from the Catholic Church) and the twelve remaining classrooms at Jefferson. Students were split again for the 1980–81 school year, this time between Jefferson and Emerson School. Both the Jefferson and Emerson buildings closed the next year, when the new Jefferson building was completed.

Jefferson is a sister building to Gate City Elementary, both opening in 1982. They were designed exactly alike except that floor plans were reversed. Gate City serves students on the east bench while Jefferson caters to the west bench. The schools were designed with classrooms surrounding a central media center to minimize corridors and architectural barriers. Floors and walls are carpeted, and the buildings are bermed with earth to a height of five feet for energy efficiency.