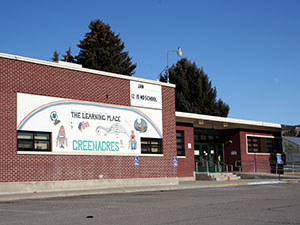 Greenacres Elementary School opened in 1954 just north of Pocatello Townsite in the growing city of Alameda. Growth was marked not only by the opening of Greenacres but also by the opening of two additional schools in the area: Alameda Junior High—the district's third junior high—in 1953 and Lewis & Clark Elementary School—Greenacres' sister building—in 1954 (next door to the junior high).

Greenacres and Lewis & Clark both operated for a year before additions were in order. Each building received three classrooms, one reading room, and boys and girls restrooms. A few years later in 1962, the City of Alameda was annexed into Pocatello, making it the largest city in Idaho for a time. Chubbuck voted against a similar merger with Pocatello and remains its own municipality.