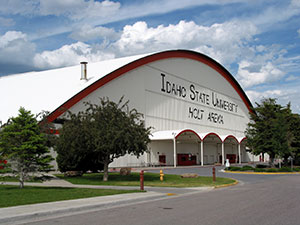 Here's a bit of trivia: Where was the first domed stadium built on a U.S. college campus? You guessed it! Pocatello, Idaho. Not only that, Holt Arena was the nation's second indoor football stadium, succeeding the famous Houston Astrodome. Known for many years as the "Mini Dome," the $2.8-million facility was funded entirely by student revenue bonds. It was completed in 1970, and sits on highly visible real estate next to I-15.

It wasn't long after completion that the 12,000-seat stadium, constructed primarily for ISU athletics, became a regional hub of activity for events ranging from trade shows to music concerts. Special events hosted at Holt Arena include the Simplot Games (track and field) and Monster Truck Grand Nationals.